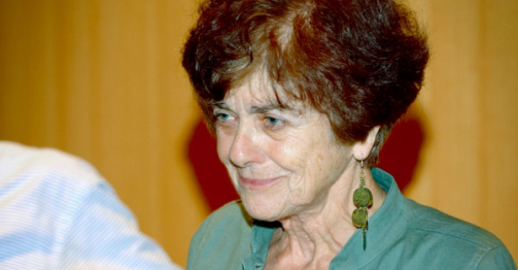 Distinguished Professor Frances Fox Piven received her Ph.D. from the University of Chicago. Before coming to the Graduate Center, she taught at Boston University, Columbia University, New York University Law School, the Institute of Advanced Studies in Vienna, the University of Amsterdam, and the University of Bologna. She is past Vice-President of the American Political Science Association,  has served as program co-chair of the annual political science meetings, and is a past president of the Society for the Study of Social Problems.  She is currently President of the American Sociological Association. She is the recipient of numerous awards, including the President’s Award of the American Public Health Association, and the American Sociological Association’s Career Award for the Practice of Sociology, as well as their award for the Public Understanding of Sociology. Her books deal with the development of the welfare state, political movements, urban political, and electoral politics.  Among them are Regulating the Poor (winner of the C. Wright Mills Award ub 1972, and updated in 1993); Poor People’s Movements  (1977); The New Class War (1982; updated 1985); Why Americans Don’t Vote (1988); The Mean Season (1987); LAbor Parties in Posindustrial Societies(1992); The Breaking of the American Social Contract (1997); Why Americans Still Don’t Vote (2000); and The War At Home (2004); Challenging Authority: How Ordinary People Change America (2006).

Frances Fox Piven continued speaking about public sociology related with the people’s power, what she named the power from below. The differences of power she explained made us think about the importance to use the people’s power for concrete actions. In our debate, we share Fox Piven’s idea of contributing solutions from the social movements, not only criticisms, but provide solutions. Everybody has power, which also depends on the cooperation between the people. Therefore it is very useful to know how to coordinate this existent power.

Here in Spain we have now a mobilization against the payment of the motorway tolls. Some people decide not to pay for it and they create a movement called: I don’t want to pay. They posted this on Internet and in some days thousands of people decided not to pay. The traffic service tried to send a fine to everybody who had not paid for the tolls. But there was such a huge amount of people that is almost impossible to fine them. So, the people have the power if they decide collectively not to obey the official power. Everybody has power in the real world, everybody depends on each other.

As power depends on everybody, the social movement also depends on the solidarity in power in order to maintain itself alive. The coordination, leadership, and integration of all communities, even those who do not have opportunities and full rights to demonstrate against the rules. All these aspects constitute a key element, for the implication of sociology in power. An example of this is the movement of Indignados in Spain, and concrete actions as the evictions of people from their houses, born out of the 15M movement. If a lot of people decide to occupy houses, power will be reversed. The ways of action of this movement is through the people, who made their voices louder, this has also been achieved, but how we can demonstrate that they have power?

We discussed Frances Fox Piven’s theory that social movements can transform society through interdependent power in a globalized and increasingly capitalist world. Interdependent power (IP) enables public actors to access and exercise “power from below.” In this sense, Piven’s theory optimistically contradicts the typical, bleak analysis of global capitalism, based on the Weberian theory that power is the ability sway others through resource utilization. This theory implies that the resources exploitable for exercising power are stratified at the top of social hierarchies, reinforcing the power of those already in positions of privilege. It thus cannot explain why social movements from below have shaped emancipatory social changes throughout US history.

For Piven, power moves in a web of interdependent relations, reliant upon cooperation from the disadvantaged masses situated in relatively low socioeconomic hierarchies. These actors can exercise power by collectively disrupting cooperation. Not only can they can withdraw their votes or labor, in a Marxist sense. They can also disrupt processes of exploitation. Disruptions are felt throughout the world because the (Durkheimian) more intricate division of labor connects us more than ever through global interdependency. Although these conditions of globalized, capitalist relations mean greater vulnerability to disruption, power from below has three main challenges. The exploited must break rules, recognize their means of self empowerment, and endure disruption.

We questioned how the disadvantaged are to endure the sanctions of rule breaking, given that this potential endurance is stratified against them in the resource-power hierarchy. We also wondered how protesters are to maintain disruption when the state can use physical force to remove them. These questioned underscore what Piven’s theory of interdependent power implies for public sociology. Sociologists should discover methods to mitigate the challenges of enduring disruption and, considering Castells, map potential for communicative connections in networks of interdependence. For example, referring to Piven’s Presidential Address, we noted that consumers will not know why oil prices increase if Ogoni and Ijaw resistance cannot communicate their explosions of oil facilities as defense from Shell’s murder and ecological devastation. Similarly, Pun Ngai’s research illustrates how protestors must strive to articulate their struggle’s connection to global actors. However, Castells says that globalization concentrates power and marginalizes subaltern expression. Piven sees globalization with interdependent networks that extend avenues for expression by disruptive power from below. Yet, they are both optimistic about Internet-based, ‘horizontalized’ movements.

Speakers throughout the course demonstrate combinations of four types of sociological labor and the challenges of discursive domination that legitimize or delegitimize sociologists and their publics in public and/or professional spheres. Similar to Bello and in contrast to Wieviorka, Piven asserts that sociology in general should include activism. As a critical sociologist, she denounces their mainstream separation. Her policy sociology on welfare and voting rights overlaps with her organic work on the National Welfare Rights Organization. Like Rodriguez, her institution-building fosters public advocacy. Piven’s popular books, public speeches, and contribution to journalism are traditional public sociology, but products of professional sociology. Piven has triumphantly overcome both academic and media-based attacks, as an American, public sociologist navigating throughout these divisions of labor and activism.

Minh Quoc Nguyen (UC Berkeley): Thanks Malene and Michelle for such an amazing summary! I wanted to pose a question for all of us: what potential do you see in coupling Piven’s theory of interdependent power with Soler and Flecha’s CCM? I think there is a lot of potential there!

Fox Piven proposes an alternative to the Weberian understanding power, i.e. that A influences B to do something against B’s will or interests.  As she points out, this reproduces self-perpetuating hierarchies in society.  However, ‘sometimes the mob gets the grain’.  ‘How’, she asks, ‘does this occur, if they don’t have political resources? How do they win?’ In her quest to answer this she develops the concept of ‘interdependent power’, which rests on notions of cooperation and solidarity.  On this account, power is created by social life by the multiple ways in which people in society are involved in exchanges of cooperation. This means that all social participants have some kind of power because they all participate in the production of social life. Of course this is not static. Different parties in interdependent relations are always changing their strategies, rather like a dance. But although power extends from the rules that constitute society and the potential to break them, this is largely overlooked; the actors at the bottom end of these relationships don’t recognize this power because of various institutional ideologies.  For example, the debtors do not understand that the creditor is dependent on them; capital denies dependence on the workers. Unsurprisingly then, for psychological as well as social reasons, the workers/debtors tend to view themselves as powerless.  Although for Fox Piven, he power of those at the bottom of the social hierarchy lies in the potential to disrupt, to refuse to cooperate in the production of society there are many constraints involved. Cooperation is usually based on rules which have become enshrined in law. Breaking these can lead to severe social sanctions. To protect themselves, disrupters must have solidarity and coordination, particularly where many different types of interdependent relations may intervene to disrupt this coordination.  Both state and non-state actors may attempt this: the National Guard may be sent in, or on a more subtle level religious leaders may threaten heavenly retribution should the rebellion continue.  The role of the public sociologist is to figure out how those at the bottom end of cooperation relationships can both protect themselves from reprisals, as well as endure such disruptions.

The idea of interdependent power is an attractive one in that it gives public sociologist a role in making people aware of their role in the co-operative production of society, and their potential power to disrupt this. However, we felt that there was an underlying assumption in Fox Piven’s account that those at the bottom of the hierarchy shared the same interests and would want to disrupt for the same reasons.  There was clearly a class analysis in this account but we wondered about multiple co-existing hierarchies such as those of gender and race in which the actors may not all have the same interests, and therefore once disruption has occurred conflict rather than solidarity may follow. We would have liked some more discussion of the hard work that goes into this coordination, particularly given the complex profile of any oppressed group.  Moreover, we wondered how this account would deal with the dangers of circularity: what happens if the disrupters become the creditors – is this a tale of constant disruption of the rules of co-operation, a kind of anarchic circle (the dance metaphor) rather than a transformative vision for society? It seems to want to break the rules without offering a new way of living or organizing society. We wanted to know under what conditions it would ferment and be successful. We reflected on situations where disruption and rule breaking has been successful in South Africa. During apartheid   many townships were made ungovernable by the local people whilst alternatives were created such as people’s courts. Disruption and (embryonic) transformation went hand in hand. This is the question for public sociologists. How do we tie disruption to transformation?  We also discussed a hunger strike that has just taken place at our University. Students starved themselves in solidarity with discharged caterers. The students are clearly not at the bottom of this hierarchy and are disrupting on behalf of those who are. Moreover, a hunger strike does not break any rules (as far as we know there is no rule against starving yourself). It could have been more disruptive if, as Fox Piven advocates, it was mass action – solidarity from all students; yet we felt its power lay less in the numbers, or indeed any legal infraction, and more in the moral and emotive power it expressed, something which was missing from Fox Piven’s account.