ISA Award for Excellence in Research and Practice 2018, Nira Yuval-Davies
presented by Margaret Abraham, President of the International Sociological Association (2014-2018)

Since the inception of the discipline, sociologists have been concerned with power, violence and justice. Current social, economic and political challenges enhance their relevance. As capitalist globalization expands and deepens, corporate power increases along with global, national and local inequalities. New geo-political power configurations and confrontations are emerging, with violence being used as a tool to oppress and also to resist oppression. Colonial histories and contemporary land appropriations reflect the structures and cultural processes that perpetuate violence against indigenous and minority communities. States’ failures to meet their responsibility to provide basic resources are often deflected by blaming the most vulnerable. Both global economic and geo-political processes create crises and massive displacements of people and, at the same time, fuel racism, nationalism and xenophobia. We have also seen an increasing buildup of a culture of fear as a powerful tool used by states, corporations and other institutions to generate popular support for curtailing freedom in the name of security. Efforts to curtail the flow of desperate refugees, attest to the reinforcement of national and racialized borders. Despite visible progress on equality issues, violence against women and intersectional violence point to the entrenchment of the gender border around the world. Equally significant is the need to consider the role of state and institutional power relations to ongoing everyday violence. In response to disempowerment, violence, and injustice we have also witnessed nonviolent movements, humanitarian interventions, and peace processes that have empowered communities, reduced violence, and promoted justice. These diverse communities have built solidarities outside the neo-liberal frames of state-global capital nexus.

This XIX ISA World Congress of Sociology will focus on how scholars, public intellectuals, policy makers, journalists and activists from diverse fields can and do contribute to our understanding of power, violence and justice. 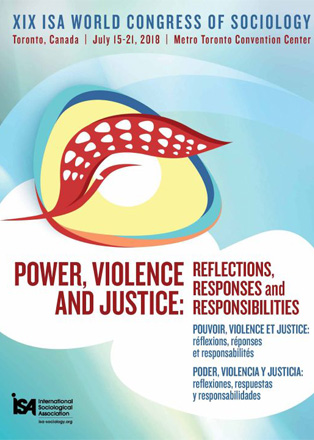 
Logo and the artist